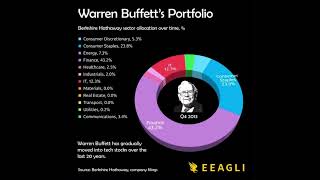 Apple broke the mold for Berkshire Hathaway. There was no company more instrumental in helping Buffett get over his aversion to tech than Apple. He took a modest $1 billion in 2016, which has since grown to $120 billion.

You can see how Apple has impacted his portfolio in this chart. I animated it over 20 years because of Warren Buffett’s history.

He was not known 20 years ago for holding tech stocks. In fact, he famously avoided the tech bubble. At one point he avoided technology altogether because he admitted that he didn’t understand the industry well enough.

Warren Buffett is still a buy-and-hold investor, but what I like about him is that he still moves with conviction. It’s just he tends to move over the very long term. I guess it is paid off for him.

To create this data visualization I used beautifulsoup in Python to scrape the data from 20 years worth of 13F corporate reports filed by Berkshire Hathaway and converted these data into a JSON file. I then used Adobe After Effects, the Cinema 4D engine and JavaScript to create this pie chart, which is powered by the JSON file.