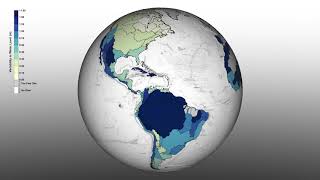 Knowing the extent of human influence on the global hydrological cycle is essential for the sustainability of freshwater resources on Earth. However, a lack of water level observations for the world’s ponds, lakes, and reservoirs has limited quantification of reservoir (human-managed) versus natural changes to surface water storage. In this study, scientists used data from NASA’s ICESat-2 satellite laser altimeter to quantify global variability in water level over 227,386 water bodies from October 2018 to July 2020.

By combining this dataset with a global database of human-managed reservoirs, the study found that 57% of seasonal water storage variability occurs in human-managed reservoirs. Global maps of the results organized by hydrologic basin reveal that natural variability in surface water level is greatest in tropical basins like the Amazon and the Congo and lowest in northern and Arctic areas such as Northern Canada and Alaska. In contrast, human-management of surface water storage in arid and semi-arid regions like the Western US, Middle East, Southern Africa and Australia, where human influence drives nearly 100% of seasonal storage variability. Overall, the finding that humans are responsible for the majority of seasonal surface water storage variability shows that we are now a key regulator of the water cycle.

As economic development, population growth, and climate change continue to pressure global water resources in the future, measurements from satellites like ICESat-2 will continue to provide vital information about how humans are managing freshwater resources worldwide.