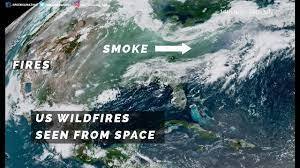 Extreme heat and dry conditions are fueling raging wildfires in the western US, charring more than a million acres, requiring evacuations and creating smoky conditions visible from space.

The smoke may linger. According to the National Interagency Fire Center’s Wednesday report, 78 large wildfires have burned 1,346,736 acres across 13 states. Most wildfires are caused by humans, though lightning strikes are another trigger, particularly in remote regions.

This year’s smoke-filled skies may feel like deja vu after a devastating year in 2020. If you live in an area where wildfires are a possibility, check out our preparedness guide.

Wildfires continue to rage in the western U.S. Some of the most intense fires have generated their own weather, with thunderstorms, lightning, and even a confirmed tornado. As a fire burns, it generates a large amount of heat, which causes air and moisture to rise, along with smoke and ash. When it reaches the upper atmosphere, it often cools and condenses to form what are known as pyrocumulus or “fire clouds” over the blaze. Some of the moisture is already present in the atmosphere, while some of it also evaporates from burning plants fueling the fire below. If the fire is large enough, the intense heating can generate a smoke-infused thunderstorm, or pyrocumulonimbus cloud, also known as pyroCb. PyroCb clouds can produce lightning, which can set off even more fires. They also generate stronger winds, which fan the fire, making it hotter and helping it spread. In some cases, the air may rise so fast that it creates a tornado.