The Top 10 Jobs Sought by People in the US, According to Google Trends 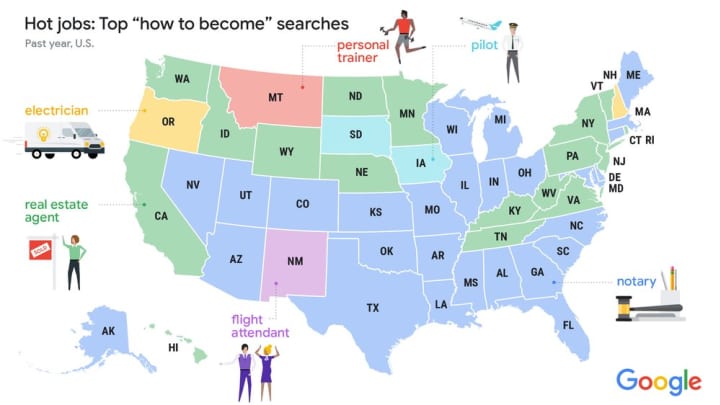 The coronavirus pandemic has spurred millions of people to quit their jobs to spend more time at home, become their own boss or pursue their dream career, among other reasons.

This phenomenon – often referred to as “The Great Resignation” – has dominated conversations in recent months, and new research from Google based on its search trends suggests that this quitting wave is reaching other continents.

The top countries searching for “how to leave your job” on Google between January 2021 and 2022 were the Philippines, South Africa, the U.S., Australia and the U.K.

While Google did not include additional global insights in its report, their researchers did identify the top jobs people searched for in the U.S. alongside the phrase “how to become,” such as “how to become a lawyer,” to determine which careers people are most interested in.

Google’s research shows that people are most excited about jobs that help others improve their mental and physical health, offer ample travel opportunities and flexible work schedules. “Real estate agent” and “flight attendant” claimed the top two spots on the list.

Some jobs, however, are more popular in certain regions over others. People in the Northeast, Northwestern Midwest and Western U.S. appear to be the most interested in real estate careers, while swaths of people in the South and Midwest wanted to become notaries.

Only two states’ most-searched jobs didn’t include notary or real estate agent: New Mexico, where flight attendant was the most popular gig, and Montana, where people searched for personal trainer jobs more than any other role.

Here are the top 10 jobs people want in the U.S. right now according to Google, how much they pay and the education requirements: