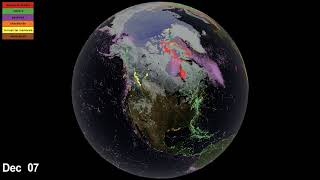 The Arctic Animal Movement Archive (AAMA) is a new and growing collection of studies describing movements of animals in and near the Arctic. The AAMA includes millions of locations of thousands of animals over more than three decades, recorded by hundreds of scientists and institutions. By compiling these data, the AAMA supports public data discovery, preserves fundamental baseline data for the future, and facilitates efficient, collaborative data analysis. We have used the AAMA to document climatic influences on the migration phenology of golden eagles, geographic differences in the adaptive response of caribou reproductive phenology to climate change, species-specific changes in terrestrial mammal movement rates in response to increasing temperature, and the utility of animal-borne sensors as proxies for ambient air temperature. The AAMA is a living archive that can be used to uncover other such changes, investigate their causes and consequences, and recognize larger ecosystem changes taking place in the Arctic.

These visualizations show AAMA animal location data. Some of the visualizations collpase the years down as if all of the data were from the same year; others show the data with the years passing. Several different groupings of animals are shown: marine mammals, raptors, seabirds, shorebirds, terrestrial mammals, and waterbirds. Snow and sea ice are also shown for context as they correlate to animal movements.

Data citation: The Arctic Animal Movement Archive (AAMA) is a collection of studies that contain animal movement and other animal-borne sensor data from the Arctic and Subarctic, owned by hundreds of participating experts and organizations. As of November 2020, this collection includes 214 studies that contain over 43 million locations of over 12,000 animals recorded from 1988 to the present. Initial development of the AAMA was funded by NASA’s Arctic-Boreal Vulnerability Experiment. The AAMA is hosted on Movebank, a free, global research platform for animal movement and animal-borne sensor data. Long-term support for the storage and curation of the AAMA in Movebank comes from the Max Planck Institute of Animal Behavior. Visit the archive to learn more and find out how to participate.