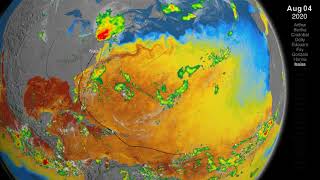 Data visualization of the 2020 Hurricane Season. Starts on May 1, 2020 just showing Sea Surface Temperatures and cloud cover. Precipitation data then dissolves in as hurricanes are tracked throughout 2020. Hurricane tracks include Hurricane strengths depicted with the letter “T” for Tropical Storm and numbers for each storm’s respective strength.

The visualization then culminates by showing all the storm tracks at once. The 2020 Atlantic hurricane season smashed records with an unprecedented 30 named storms, marking the fifth year in a row with above-average hurricane activity. The National Weather Service noted that every mile of the U.S. Atlantic coast was under a tropical watch or warning in 2020. NOAA reported the most billion-dollar disasters in the U.S. in a single year in the 40 years of record-keeping, with significant contributions from the five storms that made landfall in the U.S.

Sea surface temperatures play an important role in hurricane formation and development, with warmer temperatures linked to more intense storms. 2020 was the warmest year on record, and this year’s hurricane season brought many examples of storms that intensified quickly: ten of the 30 named storms showed rapid intensification.