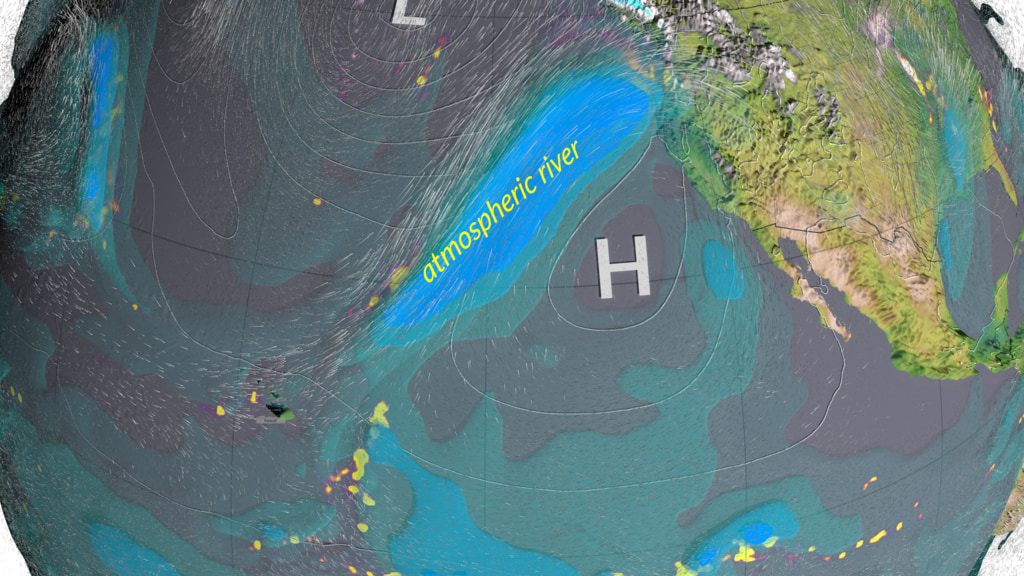 Features in Earth’s atmosphere, spawned by the heat of the Sun and the rotation of the Earth, transport water and energy around the globe. Clouds and precipitation shown here are from NASA’s MERRA-2 reanalysis, a retrospective blend of a weather model and conventional and satellite observations.

Within the mid-latitudes, winds move clouds from west to east. Within the tropics easterly trade winds converge along the equator to create a moisture rich cluster of clouds, convection, and precipitation called the intertropical convergence zone, or ITCZ. Disturbances in its flow transport immense amounts of moisture and energy from the tropics to the poles. Studies have shown that atmospheric rivers account for the vast majority of the poleward transport of water vapor.

The atmospheric river is guided by the semi-permanent sub-tropical high pressure off the coast of California and the Baja Peninsula as well as the Aleutian low in the Gulf of Alaska. The pressure gradient between the clockwise flow of the Californian high and the counterclockwise flow of the Aleutian low funnel the atmospheric moisture into a narrow corridor. The more intense the pressure gradient is, the stronger the winds are that transport the water vapor. Extreme rainfall has also been associated with the more intense gradients.

Much of the moisture stays close to the surface but the rising motion of the low pressure to the north results in the air cooling, condensing the water vapor into a liquid. Precipitation over the ocean falls along the feature’s cold front on its northern side.

Another way that air can rise and condense into precipitation is through orographic lift. When air encounters the mountains along the west coast of the United States, it is forced upwards. The rising air becomes saturated, causing rain and snow to fall, particularly on the windward side of the mountain. The flow of air continues eastward, depleted of its moisture.

Atmospheric rivers are not unique to the west coast of North America and occur around the globe, including Europe, New Zealand, the Middle East, Greenland, and Antarctica. The study of global phenomenon such as atmospheric rivers over the past four decades is made possible through NASA’s MERRA-2 reanalysis, a spatially and temporally consistent blend of satellite and conventional observations with a numerical model. With a dataset that provides hourly information around the globe since 1980, there is still much that can be learned about Earth’s atmosphere and the transport of water and energy around the globe.