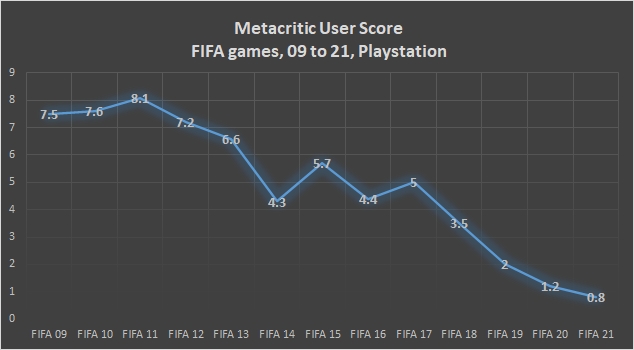 FIFA’s metacritic score continues do decline as gamers have been unimpressed with the yearly changes to the game, EA sports in general is experiencing this. Gamers argue ‘they release the same basic game with minor changes every year that essentially amounts to roster updates and meh gameplay changes. In some cases the glitches are so bad or the mechanics look funky that people get turned off to it. Happened with Madden too.’

Despite the lack of approval of these games by fans, they have continued to be very successful sales wise. Problem is the market for these games are large and people buy the new version every year or two so there aren’t many incentives to do better. Because of the lack of competition in games like Madden EA essentially has a monopoly on sports franchises.