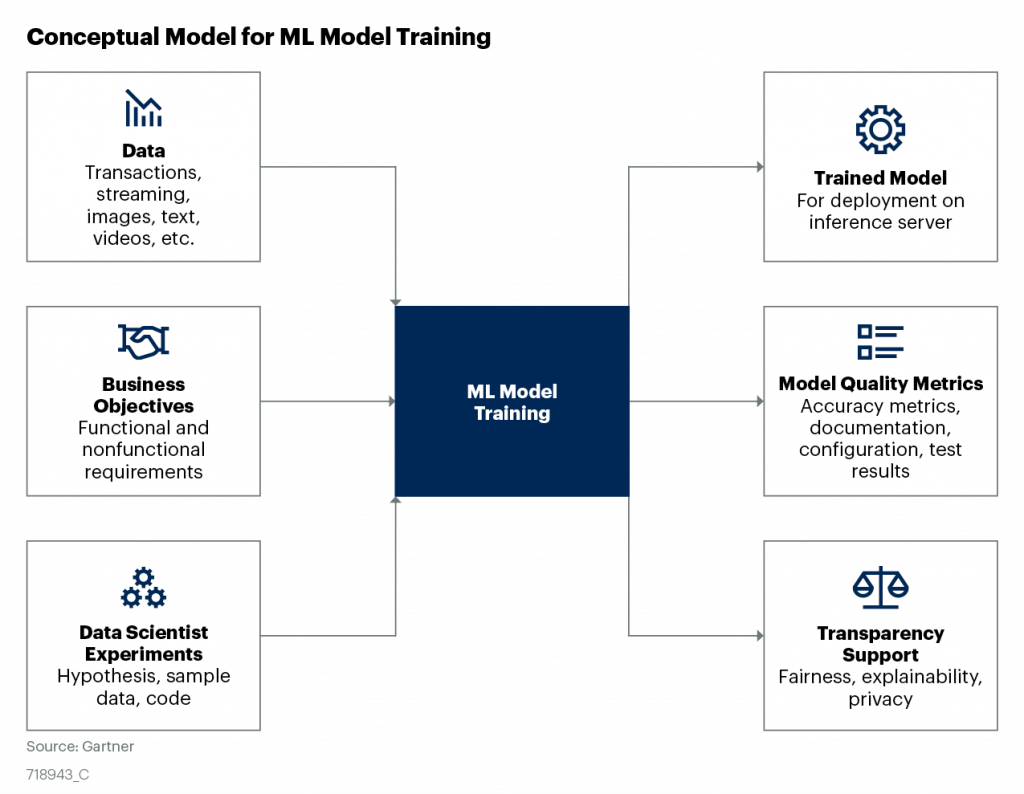 The first step in model training is to randomly split the dataset. This allows you to keep some data hidden during training, so that data can be used to evaluate your model before you put it into production. Specifically, you do this to test against the bias-variance trade-off.

Splitting your dataset gives you two sets of data:

Putting it All Together

The end-to-end training process is

You continue to cycle through these steps until you reach a predefined stop condition. This might be based on a training time, the number of training cycles, or an even more intelligent or application-aware mechanism.

Remember the following advice when training your model.

Pragmatic problem solving with machine learning is rarely an exact science, and you might have assumptions about your data or problem which turn out to be false. Don’t get discouraged. Instead, foster a habit of trying new things, measuring success, and comparing results across iterations.

One of the most common models covered in introductory coursework, linear models simply describe the relationship between a set of input numbers and a set of output numbers through a linear function (think of y = mx + b or a line on a x vs y chart).

Classification tasks often use a strongly related logistic model, which adds an additional transformation mapping the output of the linear function to the range [0, 1], interpreted as “probability of being in the target class.” Linear models are fast to train and give you a great baseline against which to compare more complex models. A lot of media buzz is given to more complex models, but for most new problems, consider starting with a simple model.

Tree-based models are probably the second most common model type covered in introductory coursework. They learn to categorize or regress by building an extremely large structure of nested if/else blocks, splitting the world into different regions at each if/else block. Training determines exactly where these splits happen and what value is assigned at each leaf region.

For example, if you’re trying to determine if a light sensor is in sunlight or shadow, you might train tree of depth 1 with the final learned configuration being something like if (sensor_value > 0.698), then return 1; else return 0;. The tree-based model XGBoost is commonly used as an off-the-shelf implementation for this kind of model and includes enhancements beyond what is discussed here. Try tree-based models to quickly get a baseline before moving on to more complex models.

Extremely popular and powerful, deep learning is a modern approach based around a conceptual model of how the human brain functions. The model (also called a neural network) is composed of collections of neurons (very simple computational units) connected together by weights (mathematical representations of how much information to allow to flow from one neuron to the next). The process of training involves finding values for each weight.

A short (but not complete!) list of noteworthy examples includes:

Hyperparameters are settings on the model which are not changed during training but can affect how quickly or how reliably the model trains, such as the number of clusters the model should identify.

Training dataset: The data on which the model will be trained. Most of your data will be here.

Test dataset: The data withheld from the model during training, which is used to test how well your model will generalize to new data.

Model parameters are settings or configurations the training algorithm can update to change how the model behaves.