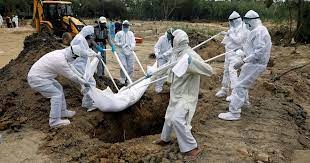 The country’s total number of Covid cases is just below 18 million while the death toll stands at 201,187. Recent media reports, however, suggest the daily fatality number may be underreported.

So far in April alone, the South Asian nation has reported more than 5.8 million new cases, sending the country’s health-care system to the brink.

India has so far administered more than 145 million vaccine doses, according to health ministry data. But, as of Tuesday, only around 23.9 million people have received their second doses.

Experts fear that a mutated variant of the coronavirus is responsible for the dramatic surge in cases during the second wave. Before the resurgence, India reported an average of around 10,000 new cases daily.

Since last year, the virus has mutated multiple times. The World Health Organization classifies those variants as either “variant of interest” or “variant of concern.” Variant of concern typically refers to a variant that shows an increase in transmissibility and more severe disease, including greater rates of hospitalization or death.

WHO classified the B1617 variant, with multiple sub-lineages that have slightly different characteristic mutations, as a variant of interest in its weekly epidemiological update on the pandemic. It was first detected in India last October but, as of Tuesday, was present in at least 17 countries including the United States, the U.K. and Singapore.