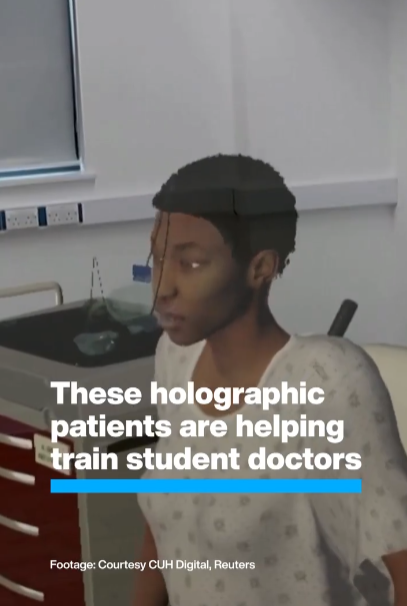 CAMBRIDGE, United Kingdom — Future doctors at a hospital in the United Kingdom have become the first in the world to train with holographic patients.

Wearing mixed-reality headsets, students can treat virtual patients using technology that mimics medical situations. Researchers at Addenbrooke’s Hospital in Cambridge developed the pioneering technology. During the simulation, medical students encounter a virtual patient with symptoms – such as being asthmatic – and must make real-time decisions about their care.

National Health Service director Stephen Powis says the new technology would help train the next generation of doctors by allowing them to practice medicine in real-time. The first training module features a hologram patient with asthma, followed by scenarios of anaphylaxis, a blocked blood vessel, and pneumonia. Further modules in cardiology and neurology are currently in development.

“The NHS has always been at the forefront of medical innovation, and this unique development by teams in Cambridge – to use life-like holographic patients in medical training – could enhance the learning experience of our next generation of doctors, nurses and healthcare workers, by creating new environments to practice medicine in real time, while improving access to training worldwide,” says Professor Sir Stephen Powis, the NHS national medical director, in a media release.

The new training method rivals conventional resources for learning, such as textbooks, mannequins, and computer software. Named HoloScenarios, the mixed-reality technology is now available for license to medical institutions across the world, with developers saying it offers a cost-effective and flexible training resource.

Mixed reality allows users to interact with and manipulate both physical and virtual items and environments. It is similar to the well-known and fully-immersive virtual reality (VR), which places the user entirely inside a digital world.

“Our research is aimed at uncovering how such simulations can best support learning and accelerate the adoption of effective mixed reality training while informing ongoing development,” says Riikka Hofmann, professor at the University of Cambridge’s education department.

“We hope that it will help guide institutions in implementing mixed reality into their curricula, in the same way institutions evaluate conventional resources, such as textbooks, manikins, models or computer software, and, ultimately, improve patient outcomes.”

Addenbrooke’s Hospital developed the new mixed-reality technology in partnership with the University of Cambridge and Los Angeles-based tech company GigXR.

“Empowering instructors with 360-degree preparation for clinical practice represents a milestone for GigXR that allows us to provide our customers with a library of applications that offers solutions for students from their first courses to continuing education,” concludes David King Lassman, founder of GigXR.

“Our first HoloScenarios module represents a new and incredibly powerful way to use mixed reality for healthcare training, to be followed up by many more modules and new applications delivered soon.”