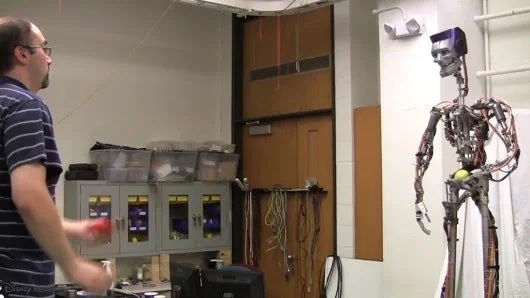 What may be an unknown fact for some is that Disney is also involved in robotics. The latest creation of Disney Research is a robot that can juggle or play catch with a human opponent.

The possibility of such robots being seen in Disney movies should not be entirely neglected. However, the goal made public by the company is that of offering some sort of physical interaction between entertainment robots and the public at its theme parks. The animatronic robot developed by Disney Research will do just that, while still assuring a proper distance between him and the theme park guests.

If you wonder how the robot is able to track the colored ball in 3D space and guess its trajectory, the answer is: ASUS Xtion PRO LIVE. This external camera represents the eyes of the robot. After capturing the video, a Kalman filter algorithm is applied for determining the destination and the timing of the ball. The ASUS Xtion PRO LIVE resembles Microsoft’s Kinect, but its dimensions and features make it more adequate for this project than Microsoft’s offering.