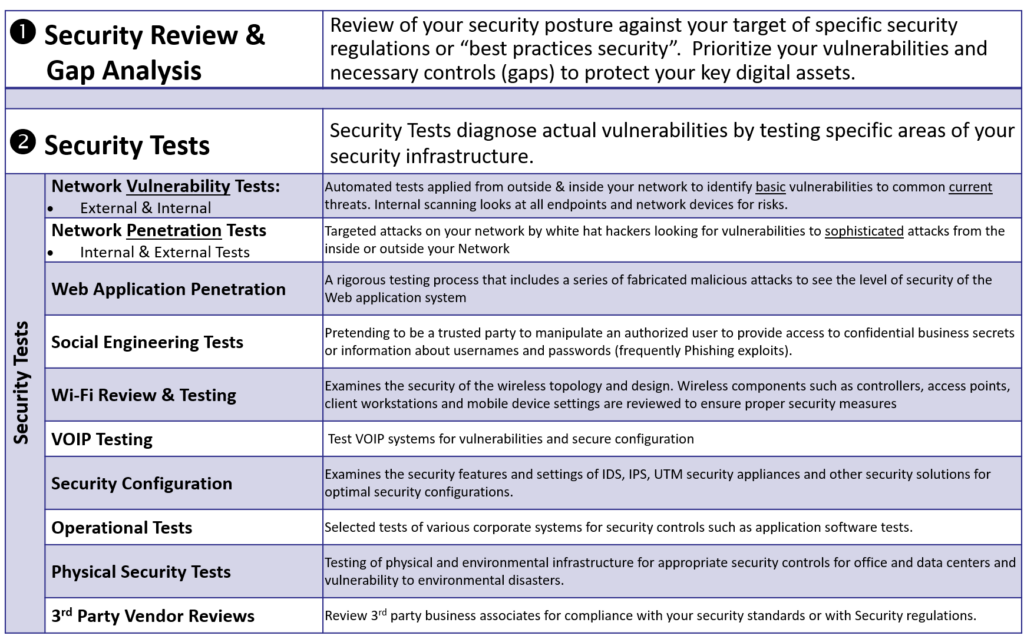 Security assessment and testing are critical components of any information security program. Organizations must accurately assess their real-world security, focus on the most critical components, and make necessary changes to improve.

We will discuss two major components of assessment and testing: overall security assessments, including vulnerability scanning, penetration testing, and security audits; and testing software via static and dynamic methods.

Network attacks may leverage client-side attacks, server-side attacks, or Web application attacks. War dialing, which gets its name from the 1983 movie WarGames, uses a modem to dial a series of phone numbers, looking for an answering modem carrier tone. The penetration tester then attempts to access the answering system.

Penetration testers often use penetration testing tools, which include the open-source Metasploit (http://www.metasploit.org), and closed-source Core Impact (http://www.coresecurity.com), and Immunity Canvas (http://www.immunitysec.com). Pentesters also use custom tools, as well as malware samples and code posted to the Internet.

Black hat hackers typically follow a similar methodology although they may perform less planning and obviously omit reporting. Black hats will also cover their tracks by erasing logs and other signs of intrusion, and they frequently violate system integrity by installing back doors in order to maintain access. A penetration tester
should always protect data and system integrity.

Penetration testers must ensure the system integrity and data integrity of their client’s systems. Any active attack, as opposed to a passive read-only attack, against a system could potentially cause damage; this can be true even for an experienced penetration tester. This risk must be clearly understood by all parties, and tests are often performed during change maintenance windows for this reason.

Finally, the final penetration test report should be protected at a very high level, as it contains a roadmap to attack the organization.

A security audit is a test against a published standard. Organizations may be audited for Payment Card Industry Data Security Standard (PCI DSS) compliance, for example. PCI DSS includes many required controls, such as firewalls, specific access control models, and wireless encryption. An auditor then verifies that a site or organization meets the published standard.

Reviewing security audit logs within an IT system is one of the easiest ways to verify that access control mechanisms are performing adequately. Reviewing audit logs is primarily a detective control.

The intelligence gained from proactive audit log management and monitoring can be very beneficial; the collected antivirus logs of thousands of systems can give a very accurate picture of the current state of malware. Antivirus alerts combined with a spike in failed authentication alerts from authentication servers or a spike in outbound firewall denials may indicate that a password-guessing worm is attempting to spread across a network.