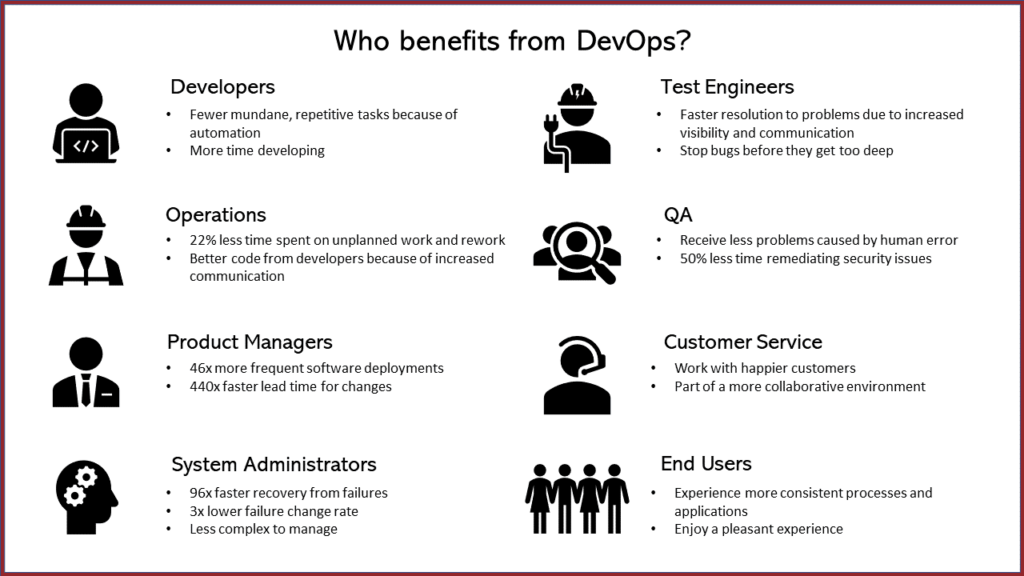 Siloed development and operations teams extend the production cycle unnecessarily. It becomes harder for both teams to collaborate on the processes required to get the software operational. Close collaboration through the elimination of silos speeds up innovation and development.

Programming errors is one of the leading reasons why a deployment fails. The frequent release of code occasioned with the DevOps approach ensures problem detection at an earlier stage. With dev and ops teams working together, recovery time is a lot shorter.

DevOps has revolutionized software development culture. This is because when all stakeholder teams take part in the development process, they focus on a common goal instead of working with different objectives. More synergy improves communication. Better communication leads to seamless development cycles, quick error discovery/resolution, and faster route to market.

Continuous integration reduces manual processes in developing and testing. Specific tasks in the development process cannot be automated. DevOps focusses the developers’ attention on those tasks, leaving the other tasks to tools that can accelerate development, such as:

Poor code is all too common, though sadly, users arrive at this realization when it’s too late. The fact is, some developers are good at what they do, while others have poor coding skills. DevOps has a solution to this problem. Frequent assessment makes it easier to assess the performance of developers within a DevOps team so that each team member is tasked with responsibilities most suited to their skills.

DevOps recognizes that software creation is not all about coding. There are many other roles involved in the process. A team member who is terrible at coding could be good at any of the different roles, and vice versa. Re-tasking team members earlier in the process prevent wastage of time and resources.

Working on a DevOps team improves interpersonal relationships and builds inter-departmental trust in the following ways:

This kind of cooperation and understanding of boost worker morale. ResearchGate shows that higher morale among employees results in increased productivity and higher profits.

The DevOps process builds quality into the development process, thereby reducing instances of unplanned work. A focus on security during the designing and development stage minimizes the need to remedy security issues later on, thus saving time and freeing more resources to other work. Besides, every member of the team is responsible for quality and security; this collective responsibility ensures team accountability for the final product.

There are emerging trends in IT every few months, all promising a better, speedier, more comfortable, and more efficient way of doing things. Industry experts also work on enhancing the overall software development process by introducing practical methodologies.  IT professionals who don’t keep up with these changes are often left behind or have to change their careers altogether.

If you are dedicated to your IT career, pursuing a Devops Engineer Certification to complement your years of experience is a great way to stay relevant in an ever-evolving industry. With DevOps automation capabilities, you can get more work done and provide better support to operations.

PK Agarwal, regional dean of Northeastern University-Silicon Valley, has aptly described IT careers saying, “There is no such thing as a ‘dead-end job’ in IT. But jobs are changing all the time, and that’s a real pain point for tech professionals. The skills they learned in college and built over time may still be relevant, but they’ll need to be refreshed and extended.

9. Become Respected in IT

Security is a pressing concern for many organizations because of the increasing incidents of black-hat hacking over the last few years. One survey shows that as the skills gap for security personnel continues, 54-percent of companies currently entrust the task of implementing security measures to DevOps personnel. It indicates that mastering DevOps security best practices can broaden your skills in dealing with security issues as well.

DevOps practitioners are in high-demand as companies continue to seek out ways to improve workflow processes. A study depicts that 46 percent of IT firms see the skills gap growing and need qualified professionals to fill them. Though challenging, those who pursue this line of work should expect to earn a substantial salary.

Though your salary will depend on your role, the average pay for the different roles is not radically different. For instance, a DevOps Release Manager earns an average of $92K, a Site Reliability Engineer $125K, and a DevOps Engineer $115K.