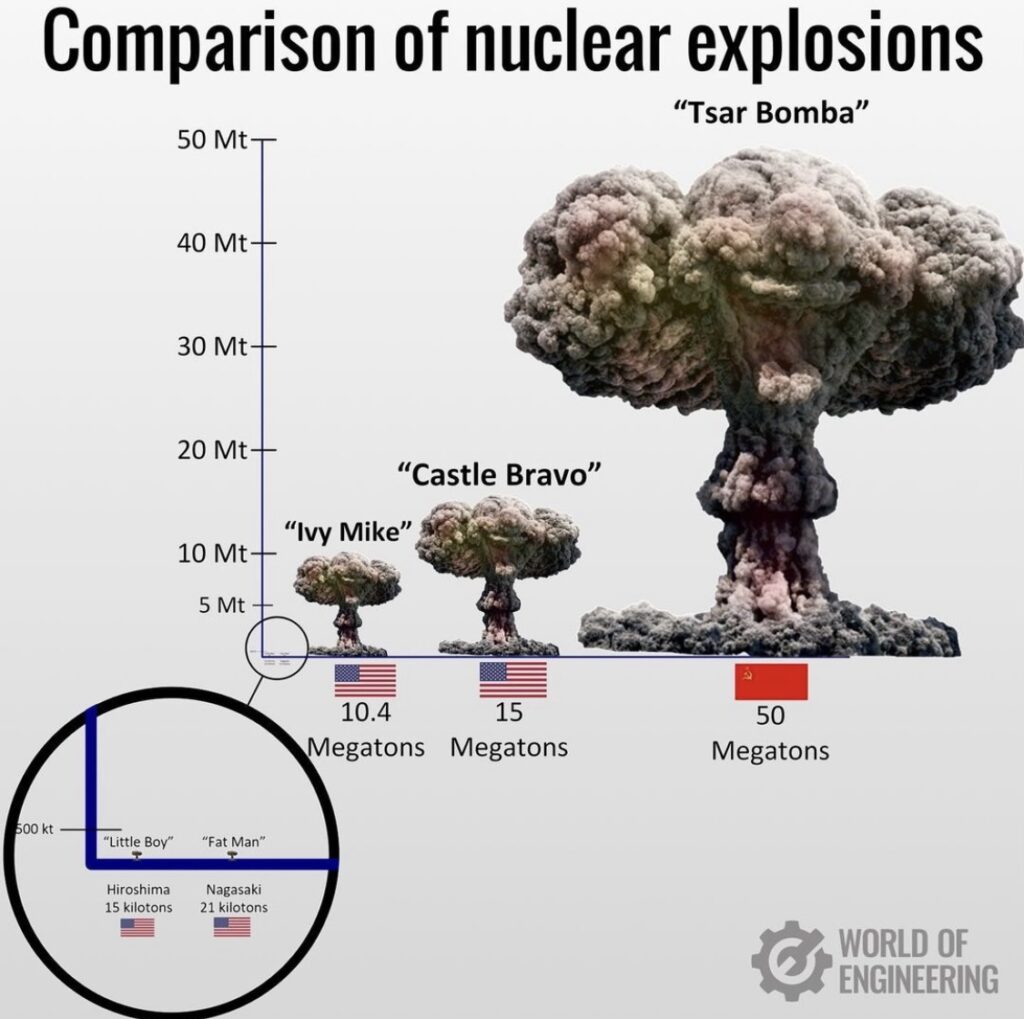 The United States and Russia now have thousands of nuclear weapons each, with China, France, the United Kingdom, India, Pakistan, North Korea and Israel also having nukes. The ongoing Russian invasion of Ukraine has sparked fears that such nuclear weapons could end up being used.

Here, Live Science takes a look at the most powerful nuclear weapons ever detonated — specifically explosions that exceeded 10 megatons. In comparison, estimates for the Hiroshima bomb are around 15 kilotons. Documents from the U.S. Department of Energy and the Russian Federation’s Ministry of Defense revealed plenty of high-energy blasts. Even so, there are a number of nuclear weapon detonations whose yields are uncertain, so only those detonations whose yields are known with confidence are included here. All of these behemoth blasts are many times more powerful than those that were used on Hiroshima and Nagasaki at the end of World War II.

On Oct. 30, 1961, the Soviet Union dropped the most powerful nuclear weapon ever exploded on the archipelago of Novaya Zemlya, north of the arctic circle. Yielding an explosion of 50 megatons the “Tsar Bomba,” as it is sometimes called, was about 3,300 times more powerful than the 15 kilotons nuclear weapon dropped on Hiroshima. The hydrogen bomb, designated as the Soviet RDS-220, was also dubbed “Big Ivan” and “Vanya,” though “Tsar Bomba” (translated to King of Bombs) is its most popular moniker.

Ironically, the bomb could have been much more powerful. It was designed to have an explosive yield of up to 100 megatons, but it was detonated at 50 megatons, wrote Alex Wellerstein, director of the Science and Technology Studies program at the Stevens Institute of Technology, in an article published in 2021 on the Bulletin of the Atomic Scientists website. The fireball from the explosion was nearly 6 miles (9.7 km) in diameter, which is “large enough to include the entire urban core of Washington or San Francisco, or all of midtown and downtown Manhattan,” wrote Wellerstein.

On Dec. 24, 1962, the Soviet Union dropped a rather unpleasant Christmas present over the test site on the Novaya Zemlya archipelago — which holds the second largest glacier complex in the Arctic, according to a paper published in 2021 in the journal Nature(opens in new tab). At 24.2 megatons, this nuclear bomb was less than half as powerful as the “Tsar Bomba” bomb but was still the second most powerful nuclear weapon ever detonated. It also about 1,600 times stronger than the bomb dropped on Hiroshima.

Because it was the second most powerful nuclear weapon, it didn’t get a catchy nickname like the “Tsar Bomba” did; it is simply referred to as “test 219.” Test 219 would be one of the last nuclear bombs dropped from the air by the Soviet Union, as a test ban treaty in 1963 banned aboveground testing and future tests were conducted underground.

On Aug. 5, 1962, the Soviet Union dropped a 21.1 megaton over the Novaya Zemlya archipelago (which is part of the Russian Arctic). The third most powerful nuclear detonation in history, it is simply known as “test 147,” again not acquiring a nickname like the “Tsar Bomba” did.

This bomb clocks in as being about 1,400 times as powerful as the one dropped on Hiroshima. Despite its immense power this nuclear detonation is not as well known as others on this list.

On Sept. 25, 1962, the Soviet Union dropped a 19.1 megaton nuke over the Novaya Zemlya archipelago. The fourth most powerful nuclear weapon ever detonated it is about 1,270 times more powerful than the Hiroshima bomb. Known simply as “test 173” this bomb never got a nickname.

An interesting note — a few weeks after this bomb was dropped the Cuban Missile Crisis began — a crisis that brought the Soviet Union and United States to the brink of nuclear war. During the crisis the Soviet Union deployed nuclear missiles to Cuba. President Kennedy considered attacking the sites and ultimately ordered a naval blockade to prevent more nuclear weapons from reaching Cuba. The Soviet Union eventually agreed to take down the missiles in exchange for the United States removing their nuclear missiles from Turkey.

On March 1, 1954 the United States detonated a 15 megaton nuclear weapon on the Bikini Atoll, in the Marshall Islands, in a test codenamed “Castle Bravo.” It was detonated on the surface rather than being dropped by air and is the fifth most powerful nuclear weapon detonation in history.

The yield was about two and half times greater than expected and resulted in nuclear fallout spreading for about 7,000 square miles (18,130 square kilometers) across the Pacific, leaving residents of the Marshall Islands, U.S. military personnel and the crew of a Japanese fishing trawler exposed to a high level of radiation, according to an article published in 2017 by the Atomic Heritage Foundation. Some residents had to be evacuated, and the people of the Marshall Islands suffered an elevated rate of cancer.

The Castle Bravo test, and the harm done to the residents, triggered global protests against the testing of nuclear bombs. In future decades, the U.S. government paid compensation to island residents; retired U.S. military personnel launched a case against the government in 1984, alleging that the American government had downplayed the radiation danger.

On May 5, 1954, another nuclear weapon was detonated on a barge beside the Bikini Atoll. The “Castle Yankee” test resulted in a yield of 13.5 megatons. It is the sixth most powerful nuclear weapon ever detonated in history, being about 900 times more powerful than the one dropped on Hiroshima. In the years that followed, global pressure would mount for a ban on nuclear tests to come into place.

The Bikini Atoll is a coral reef that surrounds a lagoon. Prior to nuclear testing, people lived on the atoll. The population was removed before the tests and has never been able to return because the atoll is still contaminated with remains from the radioactive fallout.

On Oct. 23, 1961, the Soviet Union dropped a 12.5 megaton bomb on the Novaya Zemlya archipelago, about 830 times as powerful as the Hiroshima bomb. It is the seventh most powerful nuclear weapon detonated in history. Known as “test 123,” it was a prelude to the “Tsar Bomba,” which would be dropped in the same area just a week later.

According to an article published(opens in new tab) in 1996 in the journal Polar Geography, this archipelago had small populations of people living there prior to nuclear testing. These people engaged in hunting and trapping.