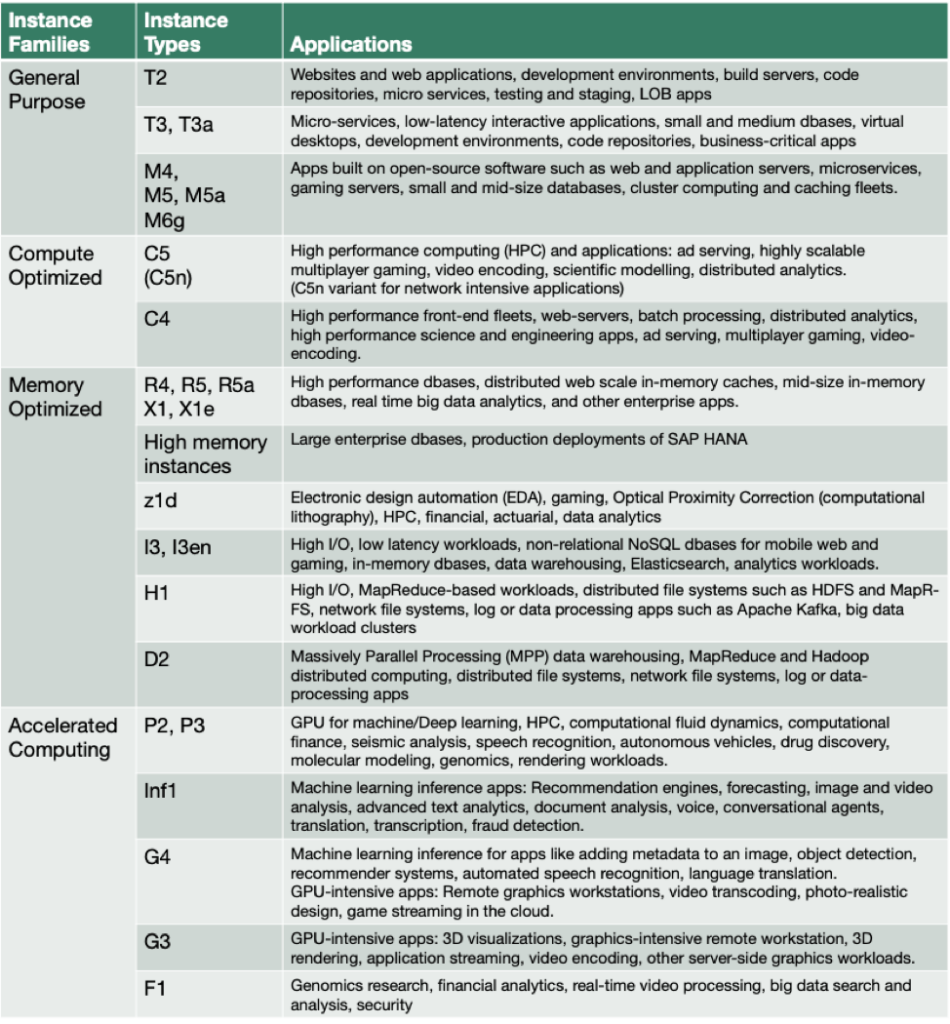 Instances are categorized by the diverse capabilities that they provide for your workloads:

The table above summarizes the different types of EC2 instances and the applications for which they are designed.

Amazon Elastic Container Service (Amazon ECS) is a highly scalable and fast container management service. You can use it to run, stop, and manage containers on a cluster. With Amazon ECS, your containers are defined in a task definition that you use to run an individual task or task within a service. In this context, a service is a configuration that you can use to run and maintain a specified number of tasks simultaneously in a cluster. You can run your tasks and services on a serverless infrastructure that’s managed by AWS Fargate. Alternatively, for more control over your infrastructure, you can run your tasks and services on a cluster of Amazon EC2 instances that you manage.

Launch types
There are two models that you can use to run your containers:

Fargate launch type – This is a serverless pay-as-you-go option. You can run containers without needing to manage your infrastructure.

EC2 launch type – Configure and deploy EC2 instances in your cluster to run your containers.

The Fargate launch type is suitable for the following workloads:

– Large workloads that need to be optimized for low overhead

– Small workloads that have occasional burst

The EC2 launch type is suitable for the following workloads:

– Large workloads that need to be optimized for price

– You must directly manage your infrastructure

Choosing the Right EC2 Instance Type for Your Application

Amazon EC2 (Elastic Compute Cloud) instances provide virtual computing capacity in the AWS cloud. The elasticity refers to the ability of users to scale their compute power up or down, on demand, to handle changes in requirements.

AWS has a vast number of EC2 instance types designed for a multitude of workloads. As of the date of this article, there are close to 300 EC2 instance types, spanning 70 Availability Zones in 22 regions, giving users endless combinations to choose from.

How can you decide which EC2 instance is best for you?

Choose the EC2 instance mix based on the type of applications you are developing and running on AWS, with the optimum CPU, memory, storage, and networking capacity required for your specific workload.

To help you get started with launching your instances, AWS provides a preconfigured template, called Amazon Machine Image (AMI). AMI defines your operating environment and the required software to package the components you need for your server. You can terminate and change the type of instances later as your business and application needs change.

For further information on how to set up an EC2 instance you can refer to this tutorial.

To help you choose the appropriate EC2 instance we will review each instance type that address different workloads and use cases.

Instances are categorized by the diverse capabilities that they provide for your workloads:

The latest generation of these instance types within this family are the following:

A1 instances are used for scale-out and Arm-based applications.

T instances (T2, T3, T3a)  are burstable, meaning that they are designed to sustain temporary spikes in CPU performance for applications with moderate CPU usage. If the instance needs to run at higher CPU utilization for a prolonged period, it can do so at a flat additional charge per vCPU-hour.

The latest generation types in this family are the following:

The latest generation of memory optimized instances in this category are as follows:

Storage optimized instances are designed for workloads that require high, sequential read and write access to very large data sets on local storage. They are optimized to deliver tens of thousands of low-latency, random I/O operations per second (IOPS) to applications.

Accelerated computing instances use co-processors to perform functions, such as floating point number calculations, graphics processing, or data pattern matching, more efficiently than is possible in software running on CPUs.