Animation of all 30 Named North Atlantic Storms of 2020 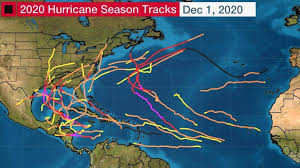 The year 2020 will be remembered for many things, not least for its highly active North Atlantic hurricane season. As early as December 19, 2019, University College London was forecasting above-average activity in the North Atlantic Basin in 2020, and all of the pre-season forecasts that followed, as well as their updates, expected an active season, but none of them anticipated just how hyperactive it would become. Collectively, the various pre-season forecasts expected 13 to 25 named storms, 7 to 12 hurricanes, and 3 to 6 major hurricanes (Category 3 and higher) to occur, compared to the 30-year (1981-2010) average of 13, 7, and 3 respectively. This year’s tropical cyclones exceeded even those expectations, becoming twice as numerous as the 30-year average and setting an unprecedented stream of records.

For the sixth year in a row, activity began before the official start of the hurricane season on June 1 when Tropical Storm Arthur formed on May 16. Storm development continued about 9 weeks ahead of an average season according to the National Hurricane Center, with each of the sequential storm names being accounted for earlier than ever before. The season’s initial hurricane often does not appear until August (for example, Hurricane Andrew made landfall in South Florida on August 24, 1992), but the first storm to reach hurricane status this year (Hanna) did so on July 25. Both 2018 and 2019 also saw hurricanes form in July.

September, the middle of which usually marks the peak of the season, was a spectacularly active month. A total of 10 named storms formed—more than in any September on record. For the first time since August 1893, three named storms formed on the same day when Wilfred, Alpha, and Beta developed within the space of just six hours on September 18. And for only the second time on record, a total of five or more tropical cyclones existed within the basin simultaneously when hurricanes Paulette, Rene, Sally, Teddy, and Tropical Storm Vicky were active on September 14 (six storms were active on September 11, 1971).

Thanks to the early start to storm development this year and the number of systems that formed, the supply of allocated names was exhausted on September 18. Letters of the Greek alphabet were then used as storm names for only the second time since the current naming convention was introduced in 1954. The previous year in which Greek letters were called upon was the extremely active year of 2005.

And as well as starting early, activity continued unusually late into the season with Hurricane Iota, the latest Category 5 storm on record, attaining hurricane status on November 15. By the end of the official season, 30 named storms, 13 hurricanes, and 6 major hurricanes had formed; a record 12 of these named storms struck the U.S., six of which were hurricanes. In the reliable modern record, only 1985 and 2005 have had as many U.S. hurricane landfalls. In addition, the first named storm of the season, Arthur, bypassed the coast of North Carolina within 20 nautical miles of the Outer Banks delivering tropical storm force winds to coastal communities.