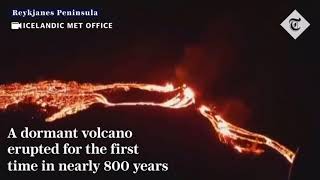 The Department of Emergency Management said it was not anticipating evacuations because the volcano is about a mile and a half from the nearest road. “We are monitoring the situation closely and as of now it is not considered a threat to surrounding towns,” assured Iceland Prime Minister Katrín Jakobsdóttir. “We ask people to keep away from the immediate area and stay safe.”

No injuries were reported in the incident, although traffic jams frustrated drivers, according to The New York Times. The lava blasted several hundred feet in the air, according to Reuters. The glow from the lava could be seen from Reykjavik roughly 20 miles away and residents were warned not to go near the lava fountains and urged to stay indoors with the windows closed due to expected “volcanic gas pollution.”

“Currently, gas pollution is not expected to cause much discomfort for people except close up to the source of the eruption,” the IMO tweeted on Saturday. “The gas [emissions] will be monitored closely.” The event took volcanologists by surprise because although tens of thousands of frequent daily earthquakes had alerted to a potential eruption, recently-heightened seismic activity had calmed, The Associated Press reported Saturday.